Following a nice evening at the Italian Embassy, the conference “Using New Technologies to Explore Cultural Heritage,” jointly sponsored by the National Endowment for the Humanities and the Consiglio Nazionale delle Ricerche (CNR, Italy’s National Research Council), kicked off at the headquarters of the NEH in Washington. Sessions included “Museums and Audiences,” “Virtual Heritage,” “Digital Libraries: Texts and Paintings,” “Preserving and Mapping Ancient Worlds,” and “Monuments, Historic Sites, and Memory.” The discussion was wide-ranging and covered topics both digital and analog. 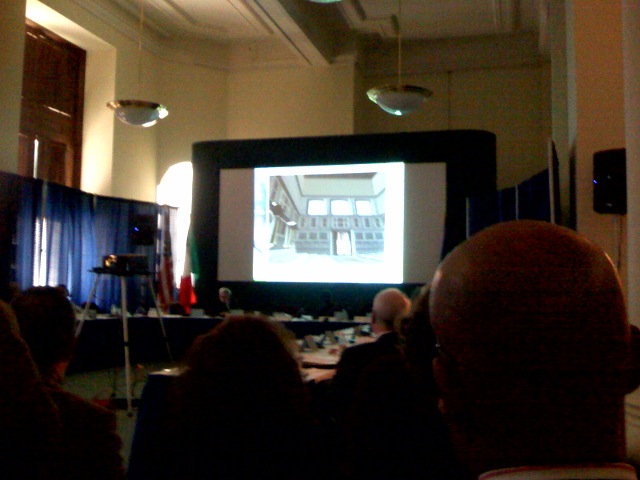 In the morning, Francesco Antinucci, the Director of Research at CNR, showed the audience some fairly depressing statistics about visitors to (physical) museums. There are 402 state museums in Italy, but only a few of them have large numbers of visitors–even though many of them have fantastic collections that are basically equivalent to the popular ones. For instance, the museum at Pompeii receives six times the visitors of Herculaneum, even though both were destroyed at the same time and Herculaneum is better-preserved and arguably has a better museum. Name recognition and museum “brands” clearly matter–a lot.

To make matters worse for cultural heritage sites, studies of museum visitors show that about half completely fail to remember what was in a gallery after they leave it. When asked, many can’t name a single painter or painting, even the gigantic, striking Caravaggio at the center of one of the galleries they studied.

Unfortunately, visitors to museum websites are equally disengaged. The average visit is one minute to the sites of the Italian state museums, and very few visitors are doing real research on these sites. In both the real and virtual world, we need to figure out how to reach and involve visitors.

In the discussion of Antinucci’s presentation, Andrew Ackerman, the Executive Director of the Children’s Museum of Manhattan (who had just presented on his museum’s new antiquities wing for kids), argued that museums and websites have to engage people with a wider variety of styles of learning and presentation. Others wondered if new technologies like podcasts and vodcasts might help. One very good point (again, by Ackerman) was that museums do a very poor job providing an overview and navigation to new visitors. The top two questions at the Metropolitan Museum of Art in New York are “Where are the restrooms?” and “Where is the art?”

Maurizio Forte, a senior researcher at CNR’s Institute for Technologies Applied to Cultural Heritage, showed off some new technologies that are revolutionizing archaeology, including Differential GPS, digital cameras (on balloons and kites), and mapping software. What’s interesting about these technologies is how inexpensive they now are. This has allowed archaeologists to begin to create top-notch 3D modeling and maps for the 85% of archaeological sites that have only had poor hand sketches or no maps at all. New display technologies allow scholars to take these maps and recreate sites in vivid virtual representations, or move them into Second Life or other virtual worlds for exploration.

These 3D displays have the great virtue of being compelling eye candy (and thus great for engaging students who can fly through a historic site as in a video game, as Steven Johnson would argue) while also truly providing helpful environments for scholarly research. For instance, you can see the change of a city across time, or really understand the spatial relations between civic and religious buildings in a square.

Bernard Frischer of UVa agreed that “facilitating hypothesis formation” was a key reason to make high-quality virtual models. Frischer showed how an extensive digital model can blend real-world measurements, digitally reborn versions of buildings, and born-digital additions of elements that may no longer be present at a site. The result of this melding is very impressive in Rome Reborn 1.0.

Andrea Bozzi, the Director of Research at CNR’s Institute for Computational Linguistics, discussed the new field of computational philology–using computational means to recover and understand ancient (and often highly degraded) texts such as Greek papyri and broken ceramics. Fragments of words can be deciphered using statistics and probability.

Massimo Riva, a Brown University Professor, presented Decameron Web, an archive completely built by teachers and students; a site for the collaborative annotation of the work of Pico della Mirandola; and the Virtual Humanities Lab, which also allows for collaborative annotation of texts. I’ve been meaning to blog about the rise of many online annotation tools; I’ll add these examples to my running list and hopefully post an article on the movement soon.

Massimo Cultraro, a researcher at CNR’s Institute for Archaeological Heritage, Monuments, and Sites, spoke about the “Iraq Virtual Museum” CNR is building–in part to reestablish online much of what was lost from looting and destruction during the war. The website will include virtual galleries of artifacts from the many important eras in Mesopotamian history, including Sumerian, Akkadian, Babylonian, Achaemenid, Hatra, and Islamic works. They are making extensive use of 3D modeling software and animation; the introductory video for the site is almost entirely movie-quality computer graphics. (The site has not yet launched; this was a preview.)

Richard Talbert, a professor of ancient history, and Sean Gillies, the chief engineer at the Ancient History Mapping Center, both from the University of North Carolina at Chapel Hill, presented the Pleiades Project, which is producing extensive data and maps of the ancient world. Talbert and Gillies emphasized up front the project’s open source software (including Plone as a foundation) and very open Creative Commons license for their content–i.e., anyone can reuse the high-quality maps and mapping datasets they have produced. Content can be taken off their site and moved and reused elsewhere freely. They advocated that scholars doing digital projects read Karl Fogel’s Producing Open Source Software and join in this open spirit.

The openness and technical polish of Pleiades was extraordinarily impressive. Gillies showed how easy it was to integrate Pleiades with Yahoo Pipes, Google Earth (through KML), and OpenLayers (an open competitor to Google Maps). (This is just the kind of digital research and interoperability that we’re hoping to do in the next phase of Zotero.) Pleiades will allow scholars to collaboratively update the dataset and maps through an open-but-vetted model similar to Citizendium (and unlike free-for-all Wikipedia). Trusted external sites can use GeoRSS to update geographical information in the Pleiades database. The site–and the open data and underlying software they have written–will be unveiled in 2008.

Gianpiero Perri, the managing director of Officina Rambaldi, discussed the development and integration of a set of technologies–including Bluetooth, electronic beacons, and visual and digital cues–to provides visitors with a more rich experience of the pivotal World War II battle at Cassino. He called it a new way to engage historical memory through the simultaneous exploration of the landscape and exhibits online and off, but it was a little unclear (to me at least) what exactly visitors would see or do. 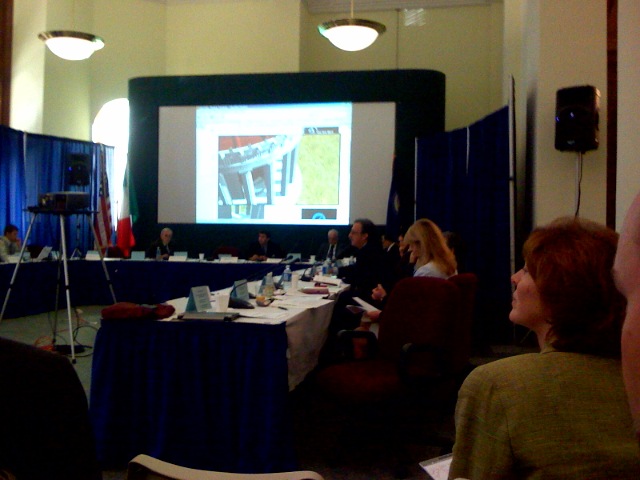 Arne Flaten, a professor of art history at Coastal Carolina University, presented Ashes2Art, “an innovative interdisciplinary and collaborative concept that combines art history, archaeology, web design, 3D animation and digital panoramic photography to recreate monuments of the ancient past online.” All of the work on the project is done by undergraduates, who simultaneously learn about the past and how to use digital modeling programs (like Maya or the free Sketchup) for scholarly purposes. A great model for other undergrad or grad programs in the digital humanities. Like Pleiades, the output of this project is freely available and downloadable.

Dan, I’m a fan of your blog but am new to the field and didn’t recognize you in the room. It would have been fun to meet you.

Thanks, Dan. I’ve sent this around to the Education staff at NEH, as well as to Brett Bobley and Jason Rhody. Just the other day,we were discussing one of the presentations at our regular lunchtime gathering, and some who did not see Antinucci’s talk wanted to know more — now they can.