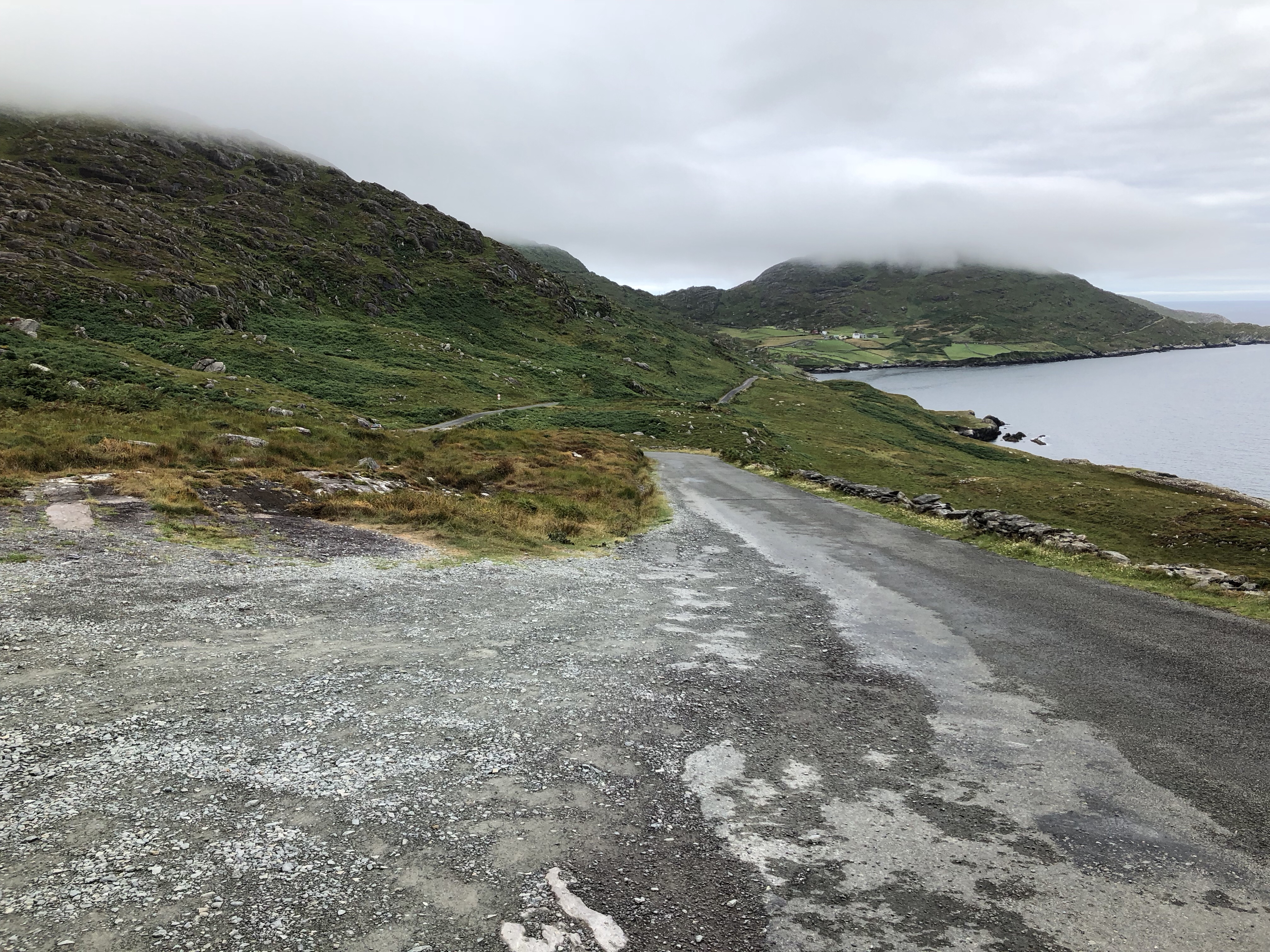 You don’t see it until you’re right there, and even then, you remain confused. Did you miss a turn in the road, or misread the map? You are now driving through someone’s yard, or maybe even their house. You slow to a stop.

On rural road R575, also known as the Ring of Beara and more recently rebranded as part of the Wild Atlantic Way, you are making your way along the northern coast of the Beara Peninsula in far southwestern Ireland. You are in the hamlet of Gortahig, between Eyeries, a multicolored strip of connected houses on the bay, and Allihies, where the copper mines once flourished. The road, like the landscape, is raw, and it is disconcertingly narrow, often too narrow for two cars to pass one another.

But not as narrow as what you suddenly see in front of you, which seems too thin for even one car. This road that strings together the scenic green towns of the peninsula into a jade necklace somehow threads its way between an old house and an old shed at a 45-degree angle. Even in a small car, you take your time making your way through, so as not to hit the buildings that crowd the road. A stern sheep looks down at you from the hill nearby. 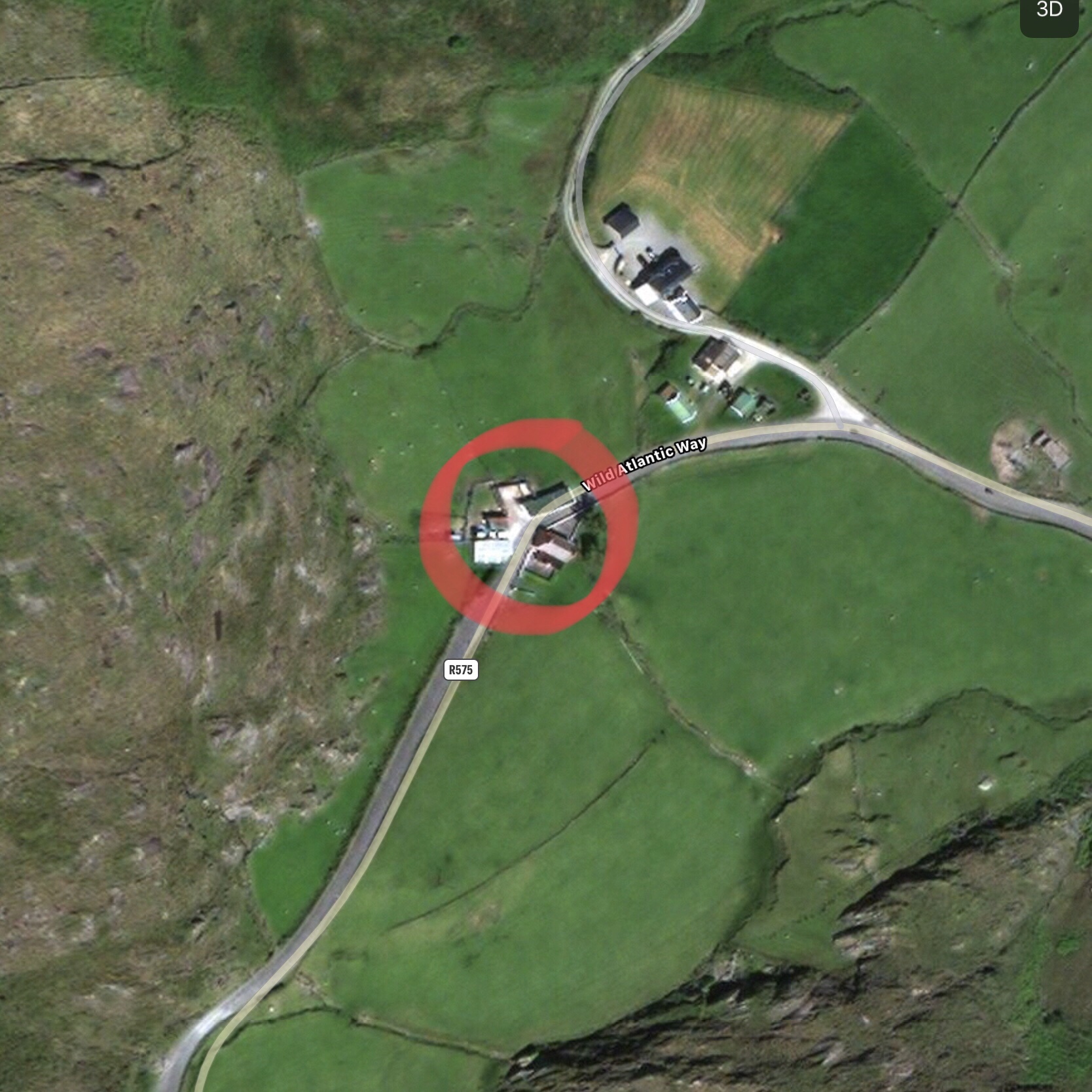 Dumbfounded, you ponder: “How do trucks and buses make it through here?”

The answer, of course, is that they don’t. Arriving in the next town, you ask at the pub about the narrow passage behind you, and the bartender fills you in.

No, large vehicles can’t get through there. If they leave from Eyeries or Allihies, when they get to that house they realize they can’t go any further, and they have to back up a mile or more just to turn around — in reverse on a winding mountain road that has drop-offs into the Atlantic. So this narrow passage of Gortahig restricts movement along the main circulating road of the Beara Peninsula — a choke point of a hundred feet along a hundred-mile stretch.

Have they ever thought about, you know, widening the road?

Well, it is someone’s house and shed, you’re gently told, a family that’s lived there a long time. Some years ago, the owner evidently offered to let the shed be knocked down to open some more room for the road, but others in west Cork County weren’t passionate about forcing that change. The only group motivated to alter the road were the tour companies that wanted to send large coaches around the Ring of Beara, like they do on the next peninsula over, Kerry.

Given the history of the property and the cost of a new road, the majority decided just to let things be. So the narrow passage of Gortahig remains.

And as you think more about it, the more you realize how much this tiny dot on the map changes everything in western Ireland. Because the big tour buses can’t make it around the Ring of Beara, they stick to the Ring of Kerry. Because they stick to the Ring of Kerry, that peninsula to the north has dramatically more tourists than Beara, even though they are equally beautiful. Because there are far fewer tourists on Beara, large hotels haven’t been established there like they have been across Kerry. Because there aren’t many hotels or tourist infrastructure, the scene on Beara is decidedly calmer, smaller, and more local.

When you arrive in Castletownbere, the largest, but still rather small, town on the Beara Peninsula, you notice that it remains primarily an active fishing port, despite abundant natural beauty and an island just off the coast with medieval ruins. It’s a tourist magnet with the polarity reversed. The fair that comes to Castletownbere in August doesn’t have the pop acts that show up for Galway’s summer arts festival, but it does feature an egg toss and a fish packing box stacking contest.

All it would take to change all of this is to relocate a modest house or its even more modest shed, but they’ve chosen not to do that on Beara. They like things as they are. 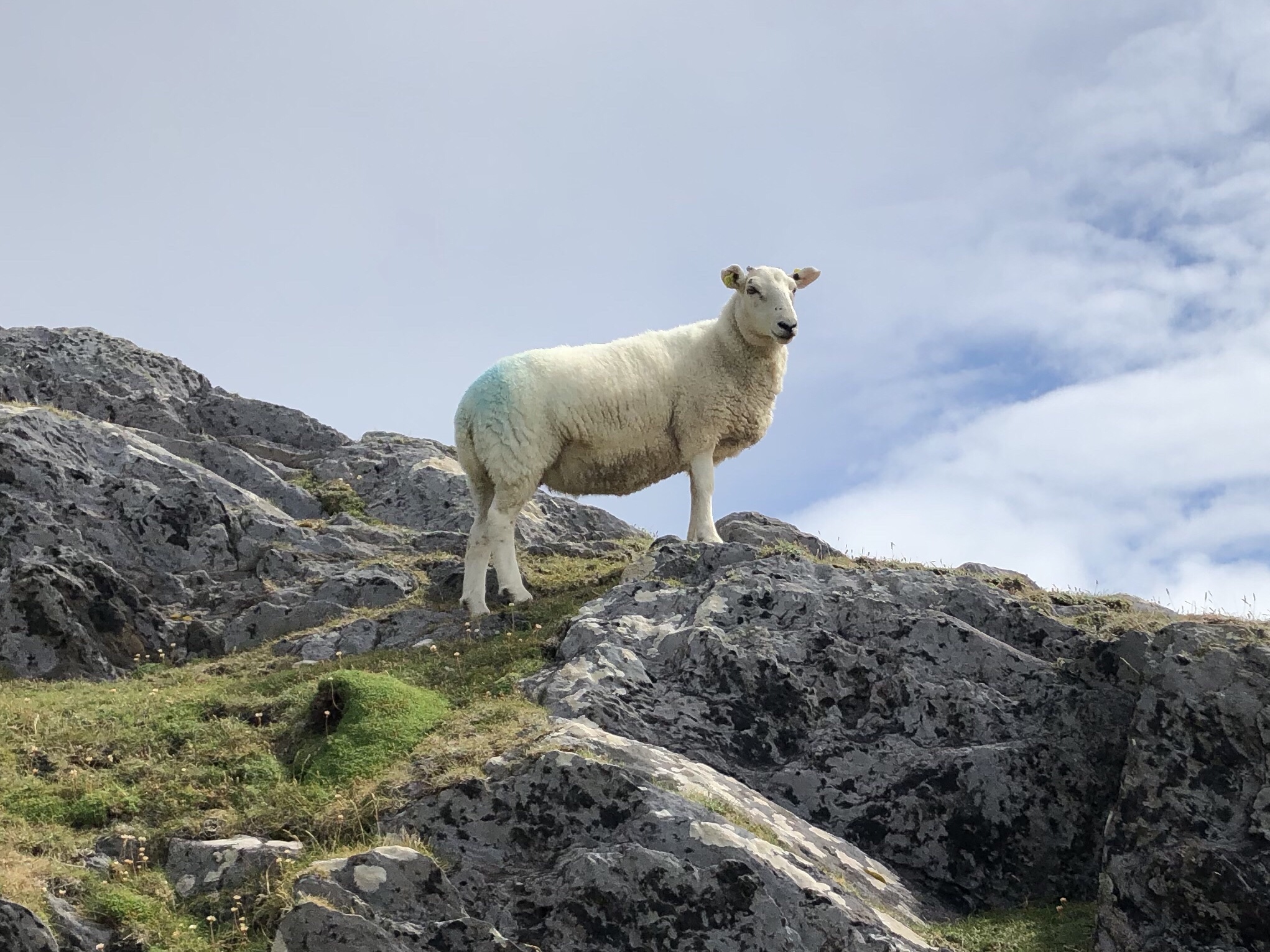 I was fortunate to sit down for a rare interview with Fred Salvucci on the final episode of this season of the What’s New podcast. Fred is now at MIT, but he is well-known in the Boston area for conceiving and being the champion of a massive engineering project which came to be known as the Big Dig, and which completely transformed the city of Boston for the twenty-first century.

For most of its postwar existence, downtown Boston was split by a giant elevated highway called the Central Artery. The Artery was an artifact common to many cities in twentieth-century America, a terrible byproduct of the car-centric culture and suburbanization that flourished in the 1950s. Elevated roadways were aggressively cut through small-scale livable neighborhoods so that people could get into the city from the suburbs, and so that others could drive through a city without entering its local roadways on their way to distant destinations. Homes were often taken from people to make way for these elevated highways, and the walkability and attractiveness of cities suffered.

The Big Dig not only put the Central Artery underground, but added a massive linear park in the center of Boston, a marquee bridge that aptly reflected the famous Bunker Hill Monument, and another tunnel to Logan Airport. It thus completely reshaped the city and improved not only its transportation, but Boston’s skyline and its ground-level fabric and beauty. It reconnected neighborhoods and people.

In a wide-ranging conversation, Fred spoke to me about how the Big Dig was engineered—it was one of the biggest engineering projects in history, at a cost of $15 billion, through a 400-year-old city ($1 billion just to relocate ancient pipes and wires)—but also how he was able to get so many people on board for such a gigantic project. Indeed, as you’ll hear, Fred saw it more as a political and socio-economic project than a transportation initiative.

Moreover, Fred provides some good thoughts about the future of transportation, including the impact (likely negative, in his view) of self-driving cars, and whether we can ever find the will—and the funds—to do something like the Big Dig again. Do tune in.

I’ve had a dozen great guests on the What’s New podcast, but this week’s episode features a true legend: Ted Landsmark. He is probably best known as the subject of a shocking Pulitzer Prize-winning photograph showing a gang of white teens at a rally against school desegregation attacking him with an American flag. The image became a symbol of tense race relations in the 1970s, not only in Boston but nationwide.

He should be better known, however, for his decades of work shaping the city of Boston and the greater Boston area, and for his leadership in education, transportation planning, architecture, and other critical aspects of the fabric of the city. The assault on him on City Hall Plaza in Boston only intensified his activism, and set him on a path to be at the center of how the city would be developed over the last 40 years. It’s a remarkable story.

On the podcast Ted Landsmark recounts not only this personal history, but the history of a Boston in general, and he provides a 360-degree view of how cities are designed, managed, and are responsive (or unresponsive) to community needs and desires. His sense of how urban feedback systems work, from local politics to technology like the 311 phone number many cities have implemented to hear from their citizens, is especially smart and helpful.

I hope you’ll tune in.