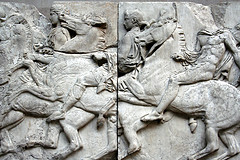 3 replies on “Digitization and Repatriation”

This reminds me of a question posed in my Museum Informatics class at FSU by professorStu Paul Marty (originally posed by Diane M. Zorich): “Which is more important–the object, or the information ABOUT the object? What if you could *only* have one or the other–which would you choose?”

My head says that without information about an object–without knowledge of its context–an object is nearly meaningless. But my heart says there’s something magical about original objects. But if I HAD to choose, I’d go with the information.

Lynch’s point is a great one–digital surrogates can be so well made now that an object’s physical information is no longer restricted to the physical object itself. Scholars can now almost have their cake and eat it, too, which is tremendously beneficial. I do wonder, though, if there would ever be objection on the part of the original institution/nation/source of objects to that sort of detailed digital surrogate–would they claim even that information?

Good catch, Dan. I wonder how this connects with Roger Schonfeld’s presentation, which notes that overseas academics cited digital scholarly publications more frequently than did Amerians.

PS: blogged most of CNI at the NITLE blog. More sessions coming.

[…] any rate, the post in question is on digitization and repatriation. Specifically, he asks if digital objects, photos, etc. are so finely detailed that they convey as […]