It’s been a very busy summer at the Center for History and New Media, and especially at the Zotero project. We had our own “Summer of Code,” our ranks swelling with fantastic interns and our code repository and site expanding from their efforts and the hard work of our core staff. In case you missed it, a major upgrade was released last week with many new features and improvements and support for countless new sites. (I’ll blog about several of the new features in the coming weeks, since they lay the foundation for new kinds of digital research.)

We have also been working on several major partnerships, one of which will launch tomorrow, August 22, 2007, when the Mozilla Corporation releases Firefox Campus Edition, which will ship with Zotero preinstalled. 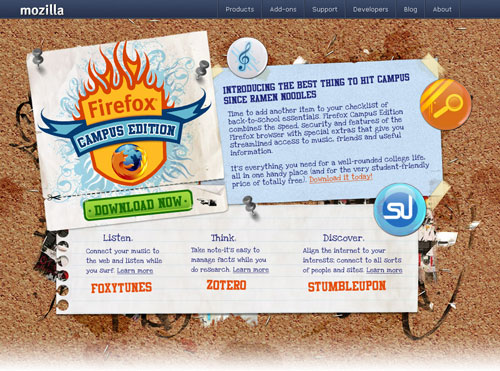 It’s really exciting news for us, and should greatly expand the already large Zotero community. Firefox Campus Edition will be featured on the Mozilla home page and will be marketed to colleges and universities. It will be available for download at www.firefox.com/backtoschool when it launches.

But we’re just getting started. Watch the Zotero blog and this space for more major news and partnerships in the coming weeks and months.

Great News! Can’t wait to try it out. Next we need a portable campus edition….