This post marks the third major redesign of my site and its fourth incarnation. The site began more than a decade ago as a place to put some basic information about myself online. Not much happening in 2003:

In 2005, I wrote some PHP scripts to add a simple homemade blog to the site: 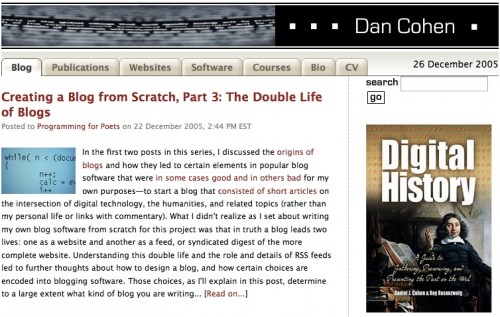 In 2007, I switched to using WordPress behind the scenes, and in doing so moved from post excerpts on the home page to full posts. I also added my other online presences, such as Twitter and the Digital Campus podcast. 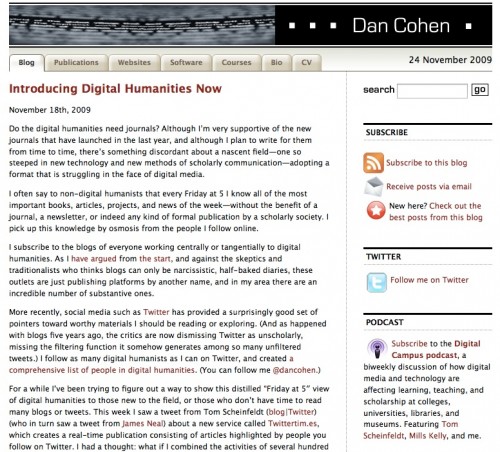 Five years and 400 posts later, I’ve made a more radical change for 2012 and beyond, as the title of this post suggests. But the thinking behind this redesign goes back to the beginning of this blog, when I struggled, in a series called “Creating a Blog from Scratch,” with how best to highlight the most important feature of the site: the writing. As I wrote in “Creating a Blog from Scratch, Part I: What is a Blog, Anyway?” I wanted to author my own blogging software so I could “emphasize, above all, the subject matter and the content of each post.” The existing blogging packages I had considered had other priorities apparent in their design, such as a prominent calendar showing how frequently you posted. I wanted to stress quality over quantity.

Recent favorable developments in online text and web design have had a similar stress. As I noted in “Reading is Believing,”

rather than focusing on a new technology or website in our year-end review on the Digital Campus podcast, I chose reading as the big story of 2011. Surely 2011 was the year that digital reading came of age, with iPad and Kindle sales skyrocketing, apps for reading flourishing, and sites for finding high-quality long-form writing proliferating. It was apropos that Alan Jacobs‘s wonderful book The Pleasures of Reading in an Age of Distraction was published in 2011.

Now comes a forceful movement in web design to strip down sites to their essential text. Like many others, I appreciated Dustin Curtis’s great design of the Svbtle blog network this spring, and my site redesign obviously owes a significant debt to Dustin. (Indeed, this theme is a somewhat involved modification of Ricardo Rauch’s WordPress clone of Svbtle; I’ve made some important changes, such as adding comments—Svbtle and its clones eschew comments for thumbs-up “kudos.”)

One of the deans of web design, Jeffrey Zeldman, summarized much of this “just the text” thinking in his “Web Design Manifesto 2012” last week. Count me as part of that movement, which is part of an older movement to make the web not just hospitable toward writing and reading, but a medium that puts writing and reading first. Academics, among many others, should welcome this change.

I really enjoyed Zeldman’s blog post (if only because my own site is rather stripped down with larger-sized font!) and I think we are all on to the same phenomenon: the value of readability — of reading itself — becoming primary again. This was a driving force in the development of book design; incunabula, as you know, were often specifically meant to “look” like manuscript books. As people adapted to reading and more people of different skill levels began to read, the hard copy book changed along with it.

With the web, the early years (oh, how I do not enjoy remembering my early site designs in 1996…) were about about being graphically appealing at the cost of content readability. But I think that now, as people get used to reading books on their phones and homework on their tablets, digital design is being reshaped to fit the needs of users to *read*.

As both an academic and an author, I really do welcome these changes. It’s all part of the natural growth cycles of the medium, I think, but I’m with you in the movement to put reading and writing first, before flashy design.

@KimBoo: Thanks for putting this in historical perspective. I agree that we are witnessing a transition away from “being graphically appealing at the cost of content readability”—perhaps a natural shift as the medium matures, and people read more and more on the web and on their mobile devices.

Dan, Being a longstanding advocate of minimalism, I enjoy the new look. But I’m curious why you don’t have dates for your posts? It would seem especially for an historian, you would use dates. And it gives me as the reader some context in which to read the post.

Gosh, I just now see the Posted on. It is so visually removed from the title, I missed it. D’oh.

Log in to Reply
Stressing quality over quantity, or why I’m not worried I haven’t blogged in awhile « Knitting Clio says:
May 29, 2012 at 9:52 am

It’s always a bit of a shame to read about this kind of thing in the Google Reader version, where every blog is presented as the same style with different text and images.

@Elijah: Actually, I think reading in Google Reader is a similar theme to this post. I like how Google Reader reduces all blogs, regardless of their design, to the same font and scale. Democratic, and focusing on the text rather than the navigation.

Log in to Reply
WordPress as a Course Management System | Digital Histories at Yale says:
September 15, 2013 at 12:36 am

[…] Step 2: Find a good theme. There is an endless sea of WordPress themes out there, many of them free. For my course blogs, I prefer something that is both minimalist and intuitive, like the best academic blogs. The simpler the better. I also spend a lot of time choosing and editing an appropriate and provocative banner image. This will be the first thing your students see every time they log in to the site, and it should reflect some of the central themes or problems of your course. It should be something worth pondering. Write a bit about the significance of the banner on the “About” page or as a separate blog post. But do not clutter your site with media. As Dan Cohen pointed out last year, effective design is all about foregrounding the content. […]