The Last Digit of Pi

[This is a rough transcript of my TEDxNYED talk, delivered on March 6, 2010, in New York City at the Collegiate School. TEDxNYED was an all-day conference “examining the role of new media and technology in shaping the future of education.” For a meta-post about the experience of giving a TED(x) talk, please read “Academic Theater (Reflections on TED & TEDxNYED).” What I actually said and did at TEDxNYED deviated from this transcript; I engaged the audience directly a couple of times, once for fun and once to get their ideas about the subject. I’ll post the video when it’s available.] 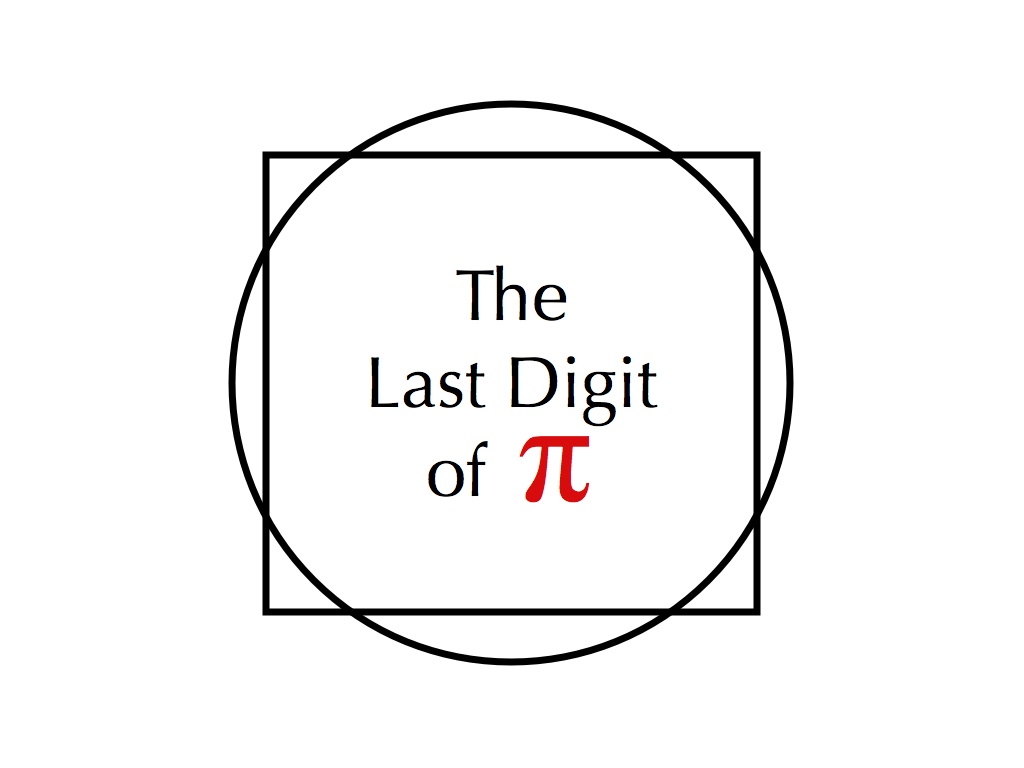 I want to tell you a story about a forgotten realm of education and knowledge. It is a cautionary tale, a parable of what happens when the world changes, when tradition is challenged.

Until relatively recently in human history, pi was the much sought-after solution to what was long called the “rectification” or “quadrature” of the circle, fancy words more easily symbolized by the diagram in this slide. How can you transform that circle into the overlaid square? One side of the square would be one-quarter of pi if the diameter of the circle is 1.

Pi was a coveted number for thousands of years, imbued with magical properties. Generations of scholars pursued it doggedly, often considering it the be-all and end-all of geometry.

This is a different pi—pi as we moderns know it: 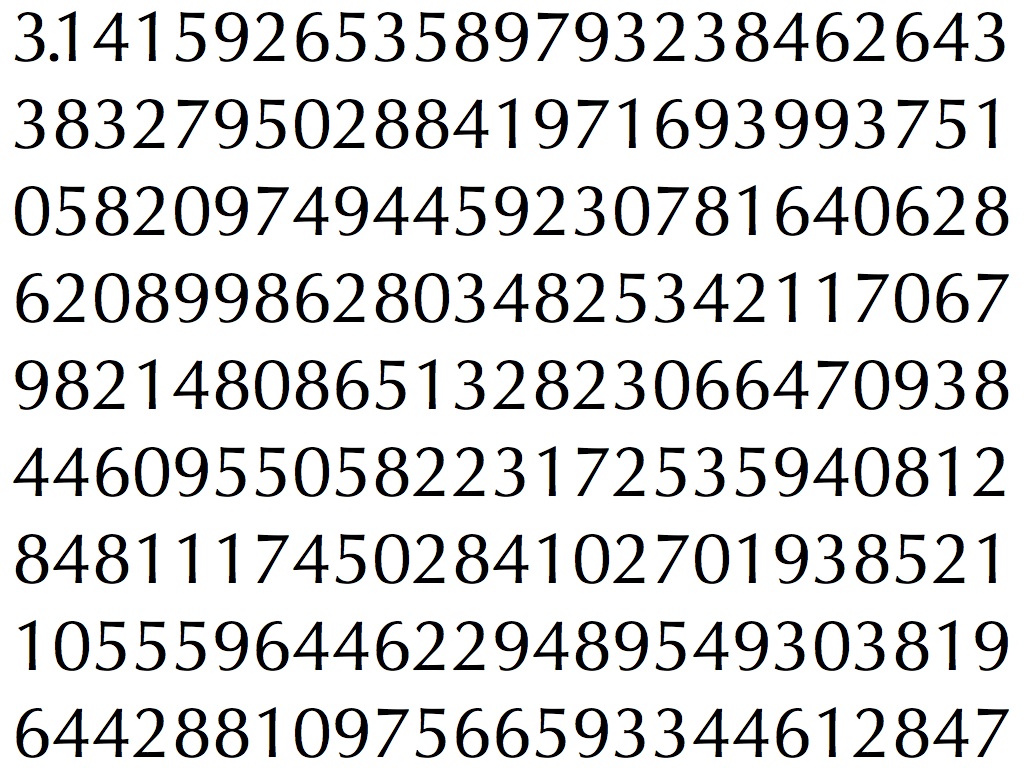 Well, not all of it, as I’m sure you know. It’s just the first 200 or so digits. The number stretches on forever. I hope you weren’t expecting me to reveal the actual last digit of pi. Because there isn’t one. Strange, no? 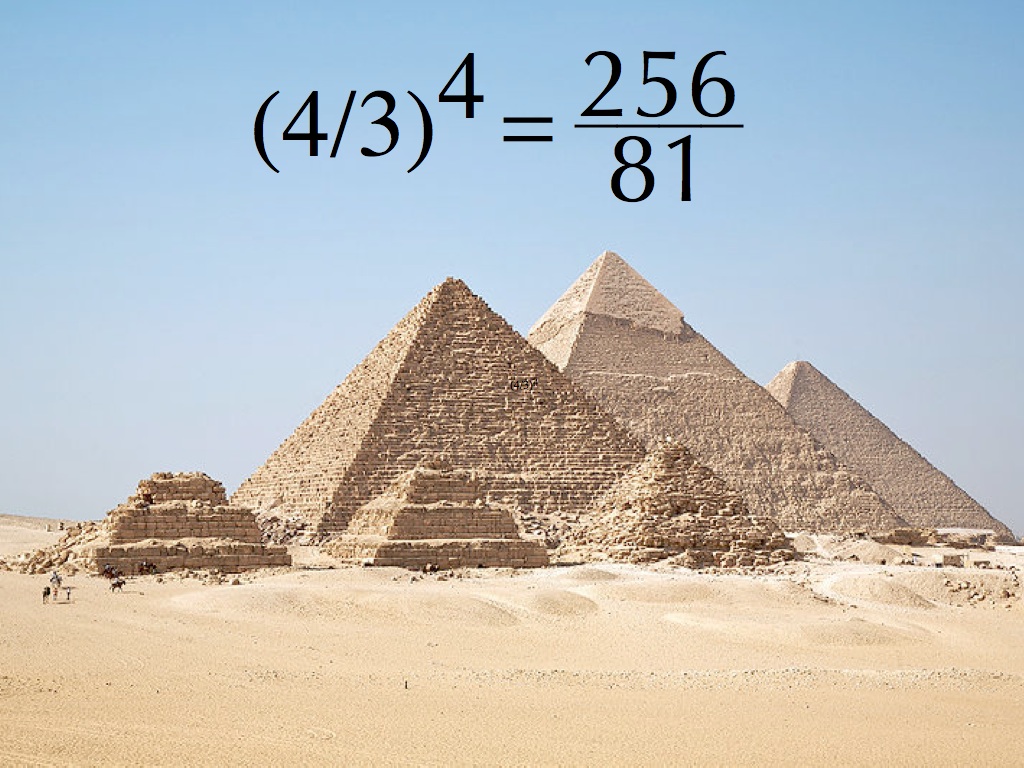 Archimedes knew better, homing in on the value of pi between a couple of very close fractions. 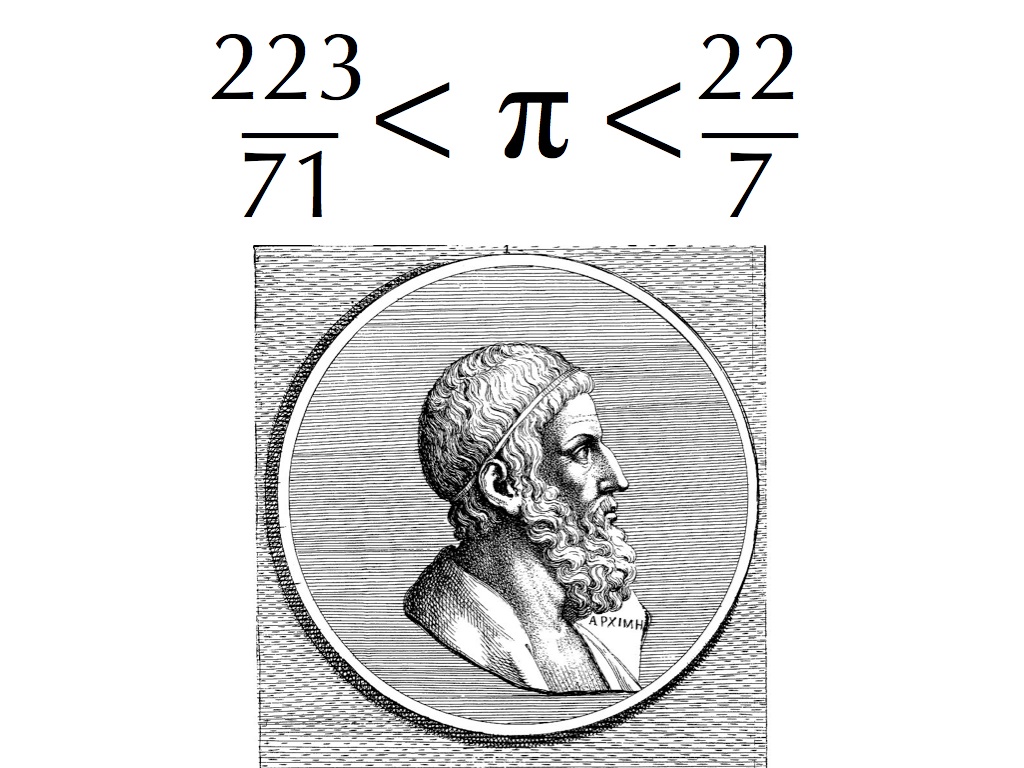 If you are a biblical literalist, pi would seem to be 3, since the Bible clearly describes 30 cubits as encompassing a circle of 10 cubit diameter. 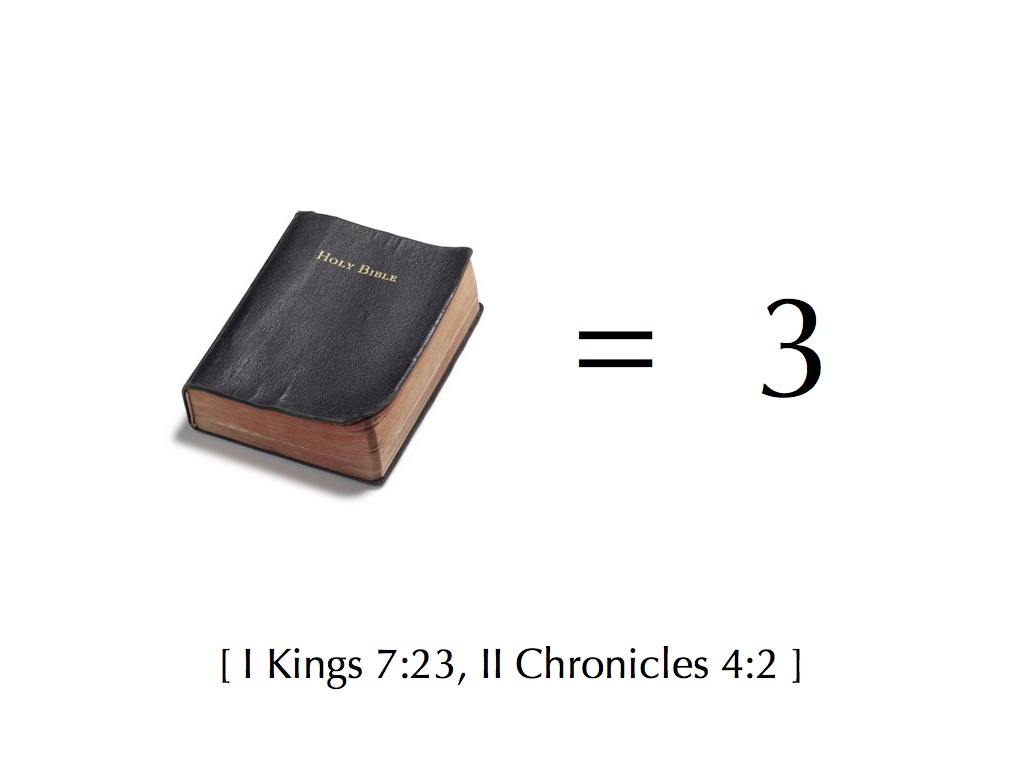 And the solutions kept coming. From ancient mathematicians and philosophers, to medieval scholars, to the Renaissance and the Enlightenment. Everyone seemed capable of finding—with enough effort—the exact value for pi. Squaring the circle was an effort of genius in an ancient science perfectly described centuries ago by Euclid. 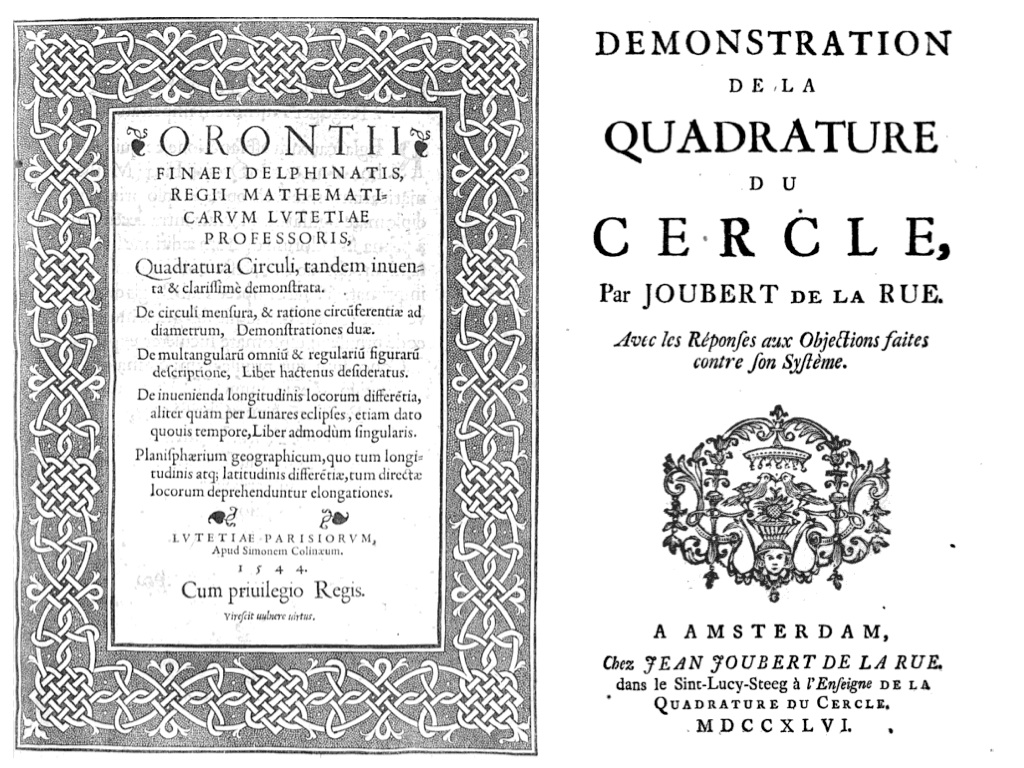 But something changed radically in the eighteenth century, just after that book on the right by Joubert de la Rue. A few mathematicians started to take more seriously the nagging feeling that pi didn’t have a perfect solution as a magical fraction. It might not have a last digit after all. This critical number at the center of mathematics might, in fact, be irrational. One mathematician began to reconceptualize pi.

And there he is: the dapper Swiss German mathematician Johann Heinrich Lambert: 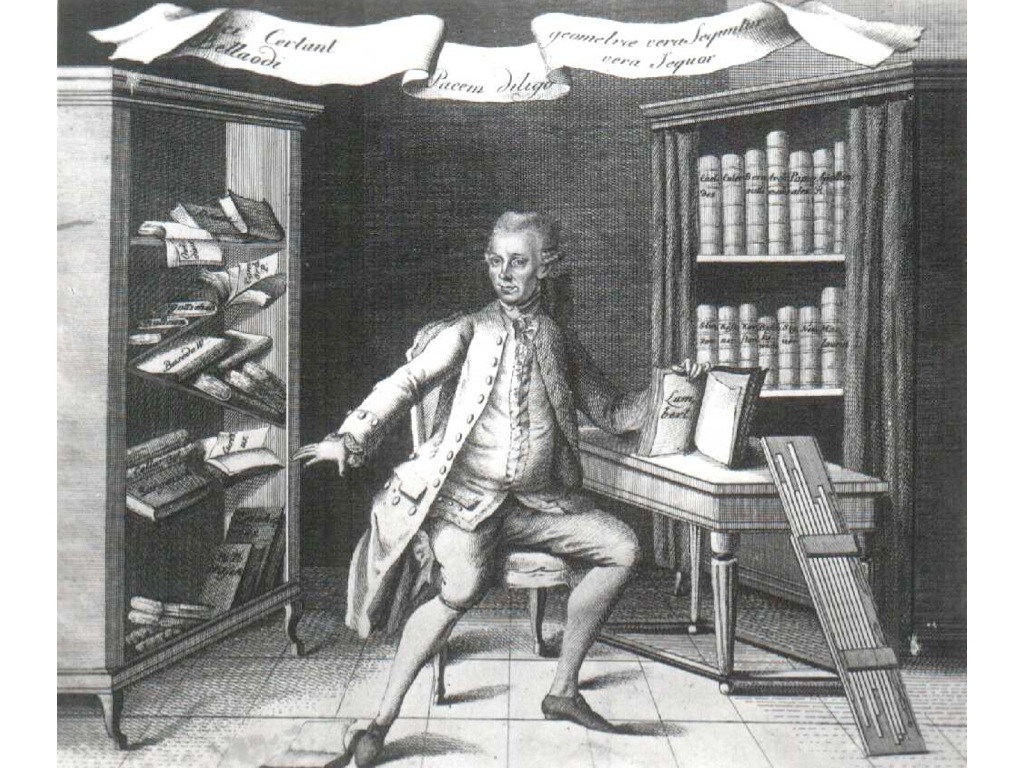 He was the son of a tailor, obviously, and was mostly self-taught in mathematics. His brilliant work in the 1760s showed that π/4 could not be a rational number—you could never exactly figure out the value of one side of that square—and thus that pi too was irrational. After Lambert, math textbooks declared the matter solved. 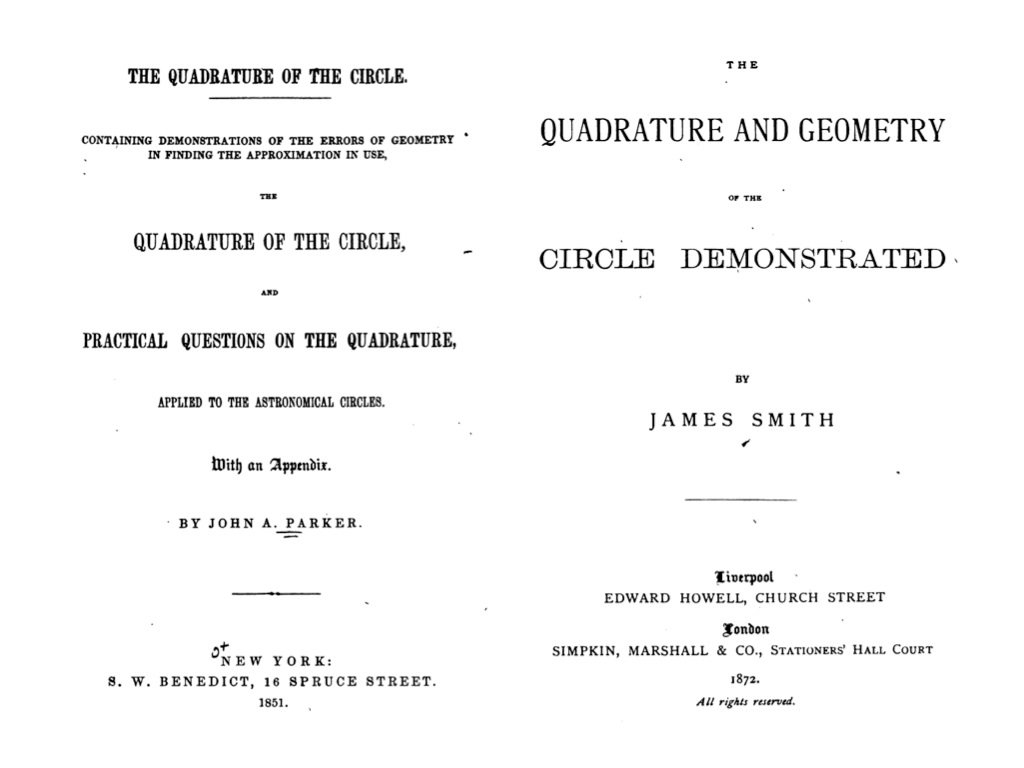 Except….circle-squaring kept on going. The world of mathematics had changed with the discoveries of the eighteenth century but somehow the message didn’t get through to many people. John Parker, on the left, came up with my personal favorite solution: pi is precisely 20612/6561. Some circle-squarers, like James Smith on the right, mocked Lambert’s proof as the work of a dilettante.

Things then got testy between the new mathematicians and those who clung to the prior vision of pi. The record of this warfare is as informative as it is humorous. In the 1860s and 70s, James Smith took on Augustus De Morgan, a math professor in London, in a series of short pamphlets, which were the Victorian equivalent of Twitter. 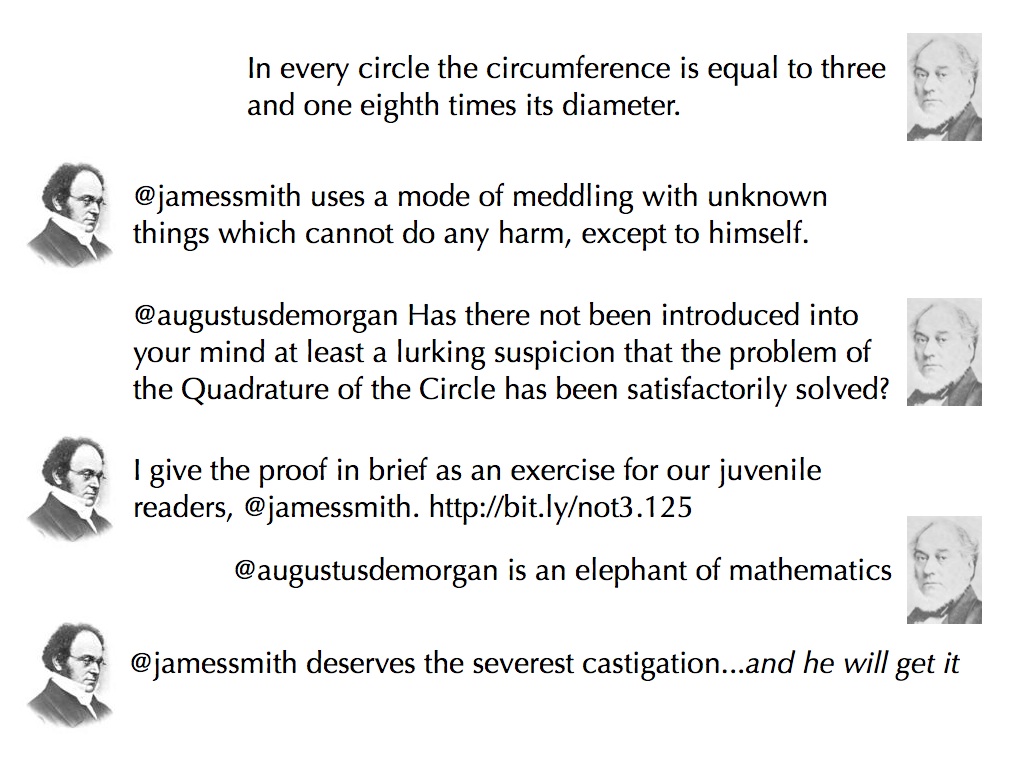 But unsurprisingly, the castigations of professors of mathematics didn’t stop the circle-squarers. Their solutions kept on coming, even in the face of criticism, even after pi had been shown to be transcendental, meaning it couldn’t even be the root of some other number or equation. My favorite book from the turn of the twentieth century had this subtitle on the cover: “The great problem which has baffled the greatest philosophers and the brightest minds of ancient and modern times has now been solved by a humble American citizen of the city of Brooklyn.”

Now, it’s easy to laugh at these misguided circle squarers, especially when they’re from Brooklyn. But if you read circle-squarers seriously, and stop to think about it, they are not so different from you or me. Even in our knowing times, we all persist in doing things that others have long since abandoned as absurd or passé.

History tells us that people are, alas, not very good at seeing the new, and instead are very good at maintaining the past at all costs. This is particularly true in education: Euclid’s Elements, written over 2,000 years ago, was still a standard math textbook well into the 19th century, despite major mathematical advances.

So it’s worth pausing to think about the last digit of pi. Why did so many continue to pursue pi as it was traditionally conceived, and why did they resist the new math?

Think for a moment about the distinction between the old and the new pi. The old was perfect, simple, ordered, divine; the new, seemingly imprecise, prosaic, chaotic, human. So the story of pi is the story, and the psychology, of what happens when the complex and new tries to overtake the simple and traditional. 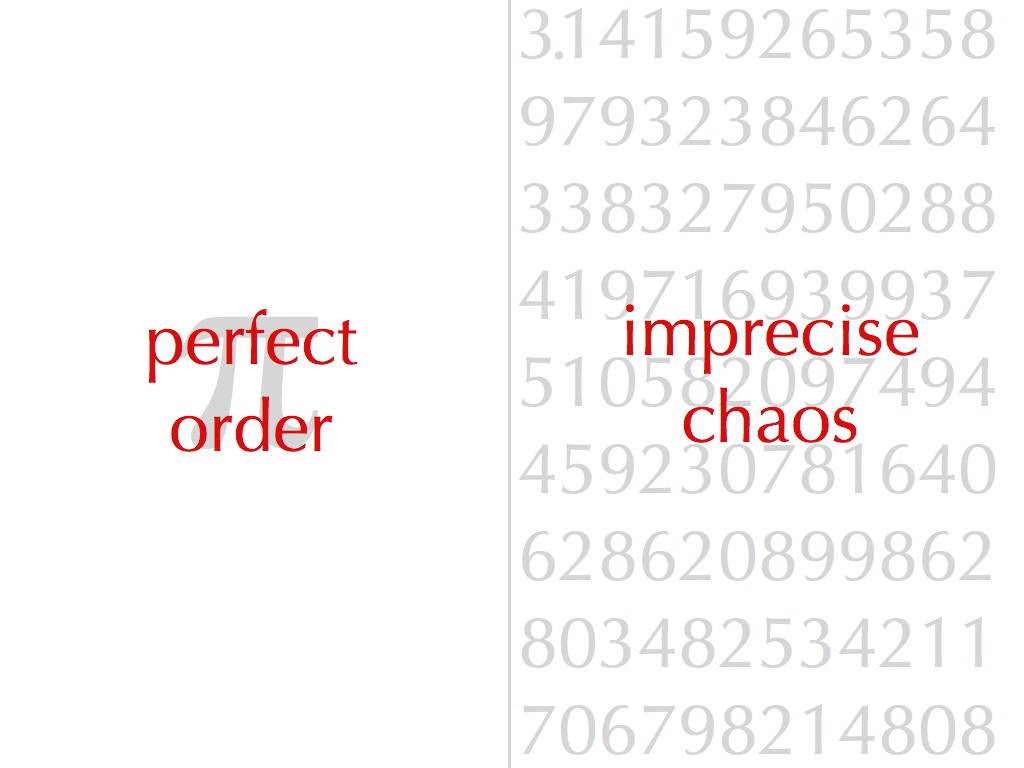 It’s happening all around us in the digital age. We’re replacing what has been perceived as perfect and ordered with the seemingly imprecise and chaotic.

Look at what has happened, for instance, in the last decade with Wikipedia and the angst about the fate of the traditional Encyclopedia.

Or newspapers in the face of new forms of journalism, such as blogging. A former baseball statistician, Nate Silver of FiveThirtyEight.com, can brazenly decide to analyze elections and economy better than most newspapers? Yes indeed. 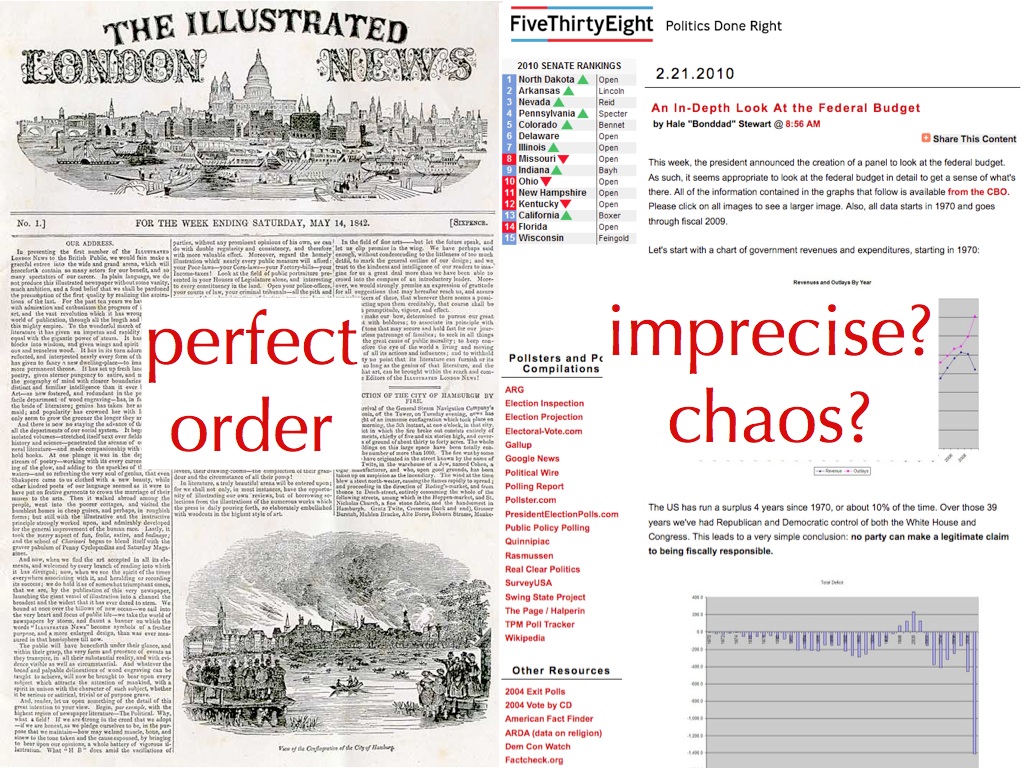 Now this audience, hip to the right side of these screens, may want to be as mean as Augustus De Morgan to those still on the left. We may want to leave modern circle-squarers behind, and undoubtedly some of them will be left behind. But for the majority who are unsettled and are caught between the old and the new, we need other methods to convince them and to change the status quo. History tells us it’s not enough to say that people are blind to the future. We have to show precisely what the weaknesses of the old are… 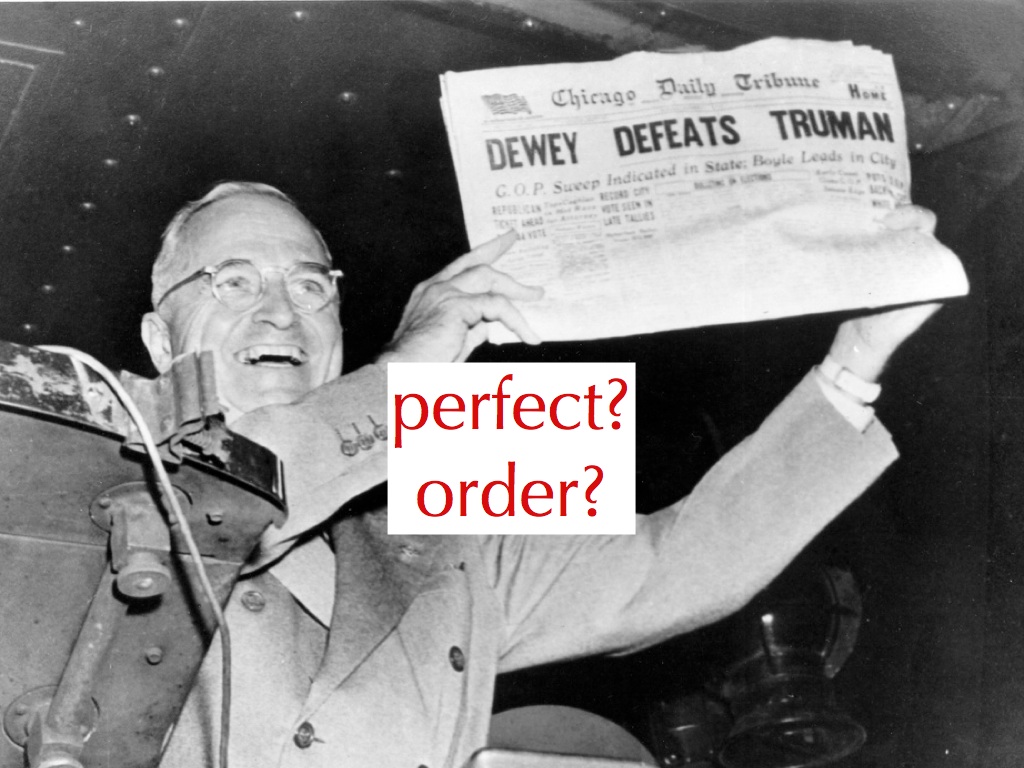 …and we have to show how the new works better than the old.

Knowing pi correctly to the 10th digit is enormously helpful when accurately predicting the movements of heavenly bodies; try using James Smith’s 3 1/8 when tracing the arc of a planet or moon. For some physics, knowing pi accurately to the 40th digit is critical. 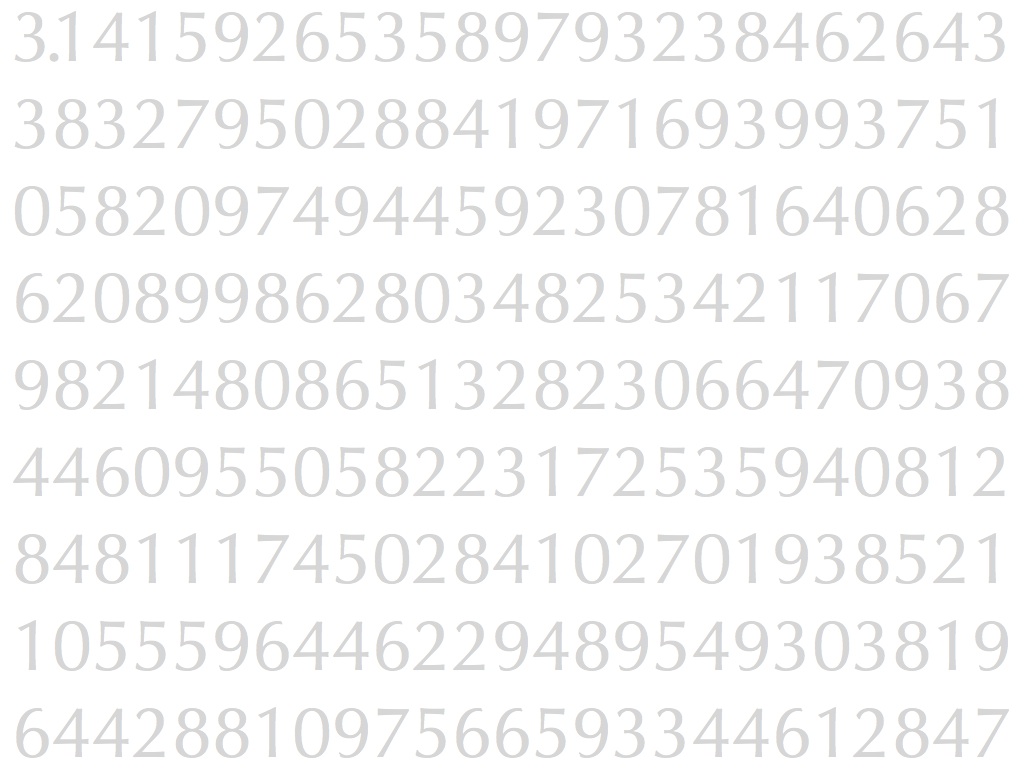 Moreover, this modern pi may be strange, but its very strangeness opened up new avenues of research and thought that were just as intellectually challenging and rewarding as squaring the circle. The transcendental nature of pi led mathematicians to ponder infinite sequences of fractions and had an impact on chaos theory. In computer science, coming up with algorithms to reach a billion or trillion digits of pi as quickly as possible advanced the field. And, if you still want an unsolved problem to crack, see if you can figure out if pi is what is called a “normal number,” where the distribution of the digits 0-9 is uniform… 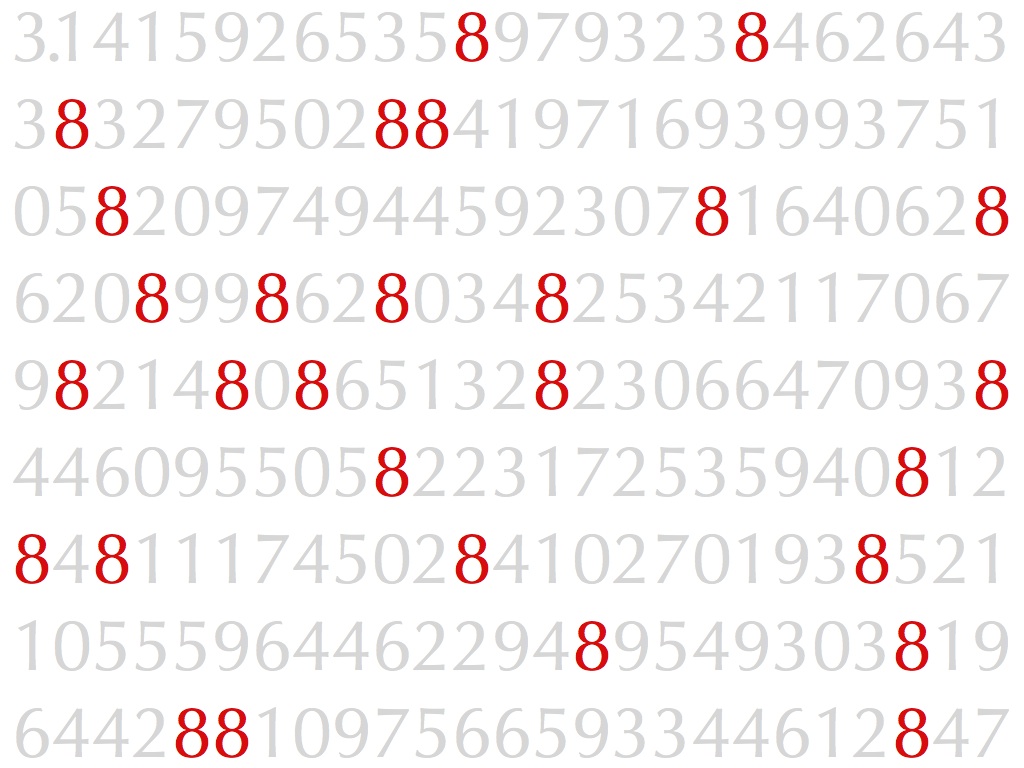 …or is there instead a preponderance of eights. Now that’s a tough problem, related to real issues in modern math. So there are still problems to be solved, more advanced problems. Math didn’t end with the end of the old pi—it just moved in new, more interesting directions.

But to get to that point, mathematicians had to show in a comprehensible way how the new pi created a new order. 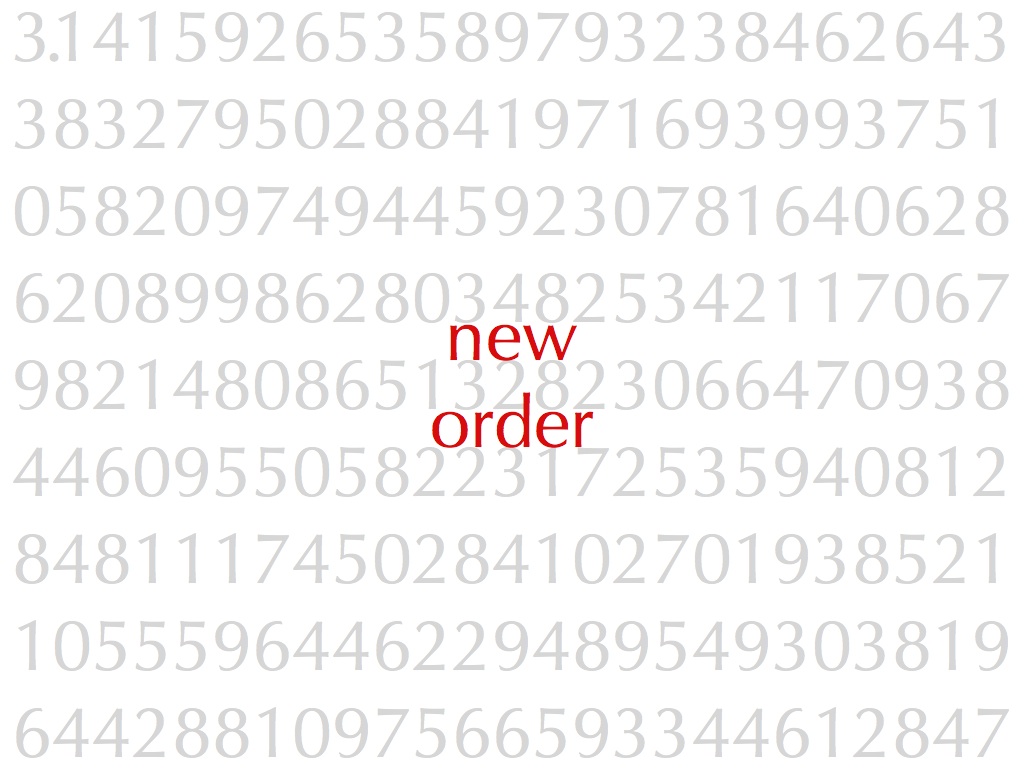 In Conferences and Workshops, Education, Talks

While I don’t think it was with ‘pi’ specifically, my favorite story about irrational numbers challenging people’s worldview is the Pythagoreans, who, the (not entirely verifiable) story goes, had a whole religion and worldview based on the sanctified rationality of whole numbers, and when one of them discovered irrational numbers with the Pythagorean Theorem, they had him killed to suppress the knowledge.

[…] begins the transcript of Dan Cohen’s TEDxNYED talk, delivered on March 6, 2010, in New York City at the Collegiate […]

I think it’s also wise, of course (or perhaps it isn’t a matter of course), to be open to the idea that in some situations, old media will be at least sufficient, and perhaps even better than new media. Did the Egyptians use their less accurate version of pi to build the pyramids? (That’s a real question — I have no idea.) If so, I can easily imagine some surly engineers pshawing at anyone who’d try to give them some more accurate pi. They just want to get those pyramids built.

Which is why I like your formulation: we do have to show when new forms are better. AND, for effective rhetoric if for no other reason, when they’re not.

Interesting. This seems very similar to the “Cathedral and the Bazaar” argument applied to old/new media instead of software, especially ESR’s idea of the importance of “plausible promise.” In what way do you think the domains translate, or not?

[…] these physical shortcomings of the laptop. But for now there isn’t such a device. In his recent TEDxNYED talk, Dan Cohen remarked, “We have to show precisely what the weaknesses of the old are … and we […]

[…] lunch there were some great sessions on “practice” by Dan Cohen, Dan Meyer, Amy Bruckman, and Chris Lehmann.  All great messages especially Dan Meyer who […]

Log in to Reply
Dan Cohen’s Digital Humanities Blog » Blog Archive » The Last Digit of Pi – Video of My TEDxNYED Talk and Live Discussion says:
May 6, 2010 at 8:19 pm

[…] enjoyed Dan Cohen’s talk, “The Last Digit of Pi”. It was geeky, historical fun. There is a sort of transcript here. But it did have a point about how hard it is to change ideas in […]