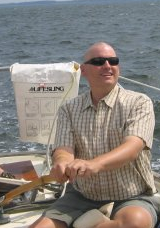 A couple of years ago I first heard from Ross Scaife in a lengthy and incredibly intelligent response to a post on this blog. A few months later I met him—and befriended him—at a digital humanities conference, and we have had spirited conversations about scholarship and digital media ever since.

Very sadly, I learned today on the Stoa Consortium blog (which Ross founded) that Ross had finally succumbed to cancer this week at the heartbreakingly young age of 47.

Like my friend and colleague Roy Rosenzweig, who passed away five months ago from cancer, Ross approached his series of painful treatments with a bravery and even nonchalance that is frankly unfathomable to me. Until fairly recently he was still sending me upbeat, hilarious notes via email, and talking about hunting and fishing on Facebook.

In the digital world it’s sometimes easy to lose track of the real humans on the other side of the network. That was never the case with Ross. His humanity, kindness, and enthusiasm was instantly apparent to everyone he spoke to online and off.

Oh man. Ross was my colleague for two years at Kentucky. An amazingly decent guy, to say nothing of his work. I didn’t even know he was sick.