Well, they didn’t have my favorite wine (Villa Cafaggio Chianti Classico Reserva, if you must know), but I had a nice evening at the Italian Embassy in Washington. The occasion was the start of a conference, “Using New Technologies to Explore Cultural Heritage,” jointly sponsored by the National Endowment for the Humanities and the Consiglio Nazionale delle Ricerche (National Research Council) of Italy. The setting was the embassy’s postmodern take on the Florentine palazzo (see below); the speaker was bestselling author and digerati Steven Johnson (Everything Bad is Good for You: How Today’s Popular Culture Is Actually Making Us Smarter; Outside.in). 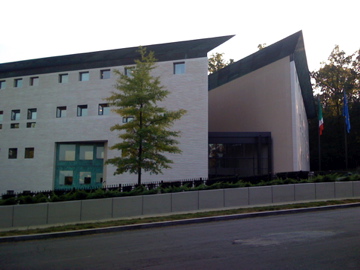 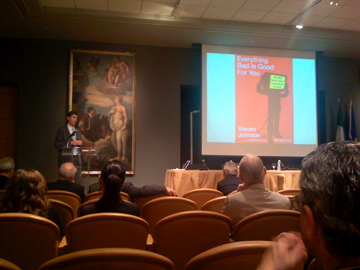 Johnson’s talk was entitled “The Open Book: The Future of Text in the Digital Age.” (I present his thoughts here without criticism; it’s late.) Johnson argued that despite all of the hand-wringing and dire predictions, the book was not in decline. Indeed, he thought that because of new media books have new channels to expand into. While some believed ten years ago that we were entering an age of image and video, the rise of web instead led to the continued dominance of text, online and off. He noted that more hardcover books were sold in 2006 than 2005; and more in 2005 than in 2004. Newspapers have huge online audiences that dwarf their paper readership, thus strengthening their importance to culture.

1) Collaborative writing is in a golden age because of the Internet. One need only look at Wikipedia, especially the social process of its underlying discussion pages (in addition to the surface article pages).

2) Fan fiction is also in its heyday. There are almost 300,000 (!) fan-written, unauthorized sequels to Harry Potter on fanfiction.net. There are even countless reviews of this fan fiction.

3) Blogging has become an important force, and great for authors. Blogs often provide unpolished comments about books by readers that are just as helpful as professional reviews.

4) Discovery of relevant materials and passages has been made much easier by new media–just think about the difference between research for a book now and roaming through the stacks in a library. Software like DEVONthink has made scholarship easier by connecting hidden dots and sorting through masses of text.

Finally, Johnson argued that despite the allure of the web, physical books are still the best way for an author to get inside someone’s head and convince them about something important. The book still has much greater weight and impact than even the most important blog post.

One reply on “Steven Johnson at the Italian Embassy”