The Artistic and the Digital

Roy Rosenzweig and I begin our book Digital History with a list of the advantages and disadvantages of digital media and technology for the practice of history. The “dangers or hazards” include questions about quality, durability, readability, passivity, and inaccessibility. Although scholars in the humanities fret about these hazards, my experience at several art meccas over the last few days has made me think that a supposedly less conservative (small “c” conservative) group than historians—artists—is having even more trouble adjusting to the realities of the digital age.

We are fortunate here on vacation in East Chatham, NY, to be equidistant from several incredible museums. No one should visit the Berkshires without making a trip to the Clark Art Institute in Williamstown, Mass., of course. But it was my experience at Olana, the outrageously designed and decorated house of one of the great nineteenth-century American artists, Frederick Edwin Church, and at MASS MoCA, the center for contemporary art in North Adams, Mass., that made me wonder whether artists can handle the impact of digital technology.

At first blush, contemporary art is full of early adopters. Photography, film, video, and Photoshop were quickly taken up by artists in the twentieth century. And several iMacs were part of MASS MoCA’s collection. (Best use of an iMac: to beam the brainwaves of the artist Spencer Finch to the star Rigel as he watched a one-second loop of the giant wave from the beginning of the TV show “Hawaii Five-O.” As the exhibition description notes with no discernible humor, “Finch’s wave is expected to arrive at its destination in the year 2956.”) 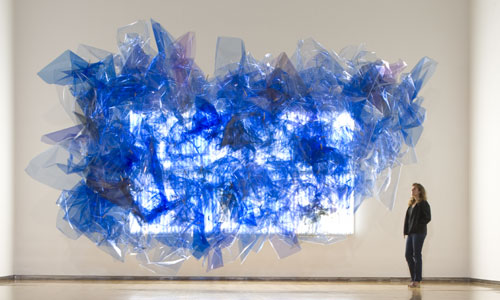 But MASS MoCA’s collections were filled with the products of technically savvy artists who have rejected placing their art in the digital realm. Panamarenko, the Belgium artist obsessed with modern technology (his pseudonym is a jokey contraction of “Pan American Airlines,” one of his obsessions), makes fussy, fragile replicas of dirigibles and other aircraft. Some may remember the Dutch physicist-turned-artist Theo Jansen’s early art, computer programs that presented digital worms replicating themselves on the screen. Jansen has long since abandoned his computer. His new artwork, easily the great highlight of MASS MoCA’s current collection, are Strandbeest, amazing robotic creatures he has fashioned out plastic rods and canvas. Conspicuously absent from the Strandbeest are on-board computers or any electronic devices—they move along the beach like giant crabs by picking up the wind in their canvas sails. 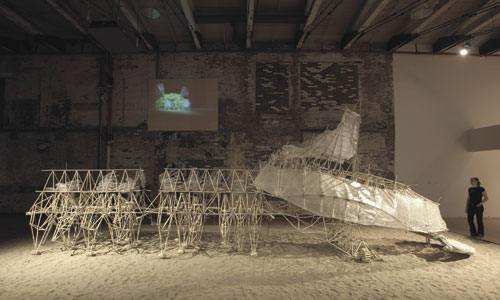 In short, the artists at MASS MoCA still feel that the height of art is to produce something physical, or a physical space, or a unique sensation, that can only be experienced by trekking to see their art. For them, art requires incarnation and uniqueness—elements that the digital realm is particularly efficient at destroying. Finch, a talented artist who uses a number of scientific instruments to create his art (colorimeters, computers), nevertheless sees real art as a single end product. Art cannot be placed on the web or uploaded to YouTube; it cannot tolerate near-infinite copies being traded across the internet like MP3s, the digital low-brow.

In this way, these artists are little different than Church. Church made a fortune on his art by selling massive (up to 5 foot by 10 foot) canvases with views of the American wilderness, the Andes, and the Middle East for equally massive prices. Like other Romantic and Victorian landscape painting, the experience of seeing a large Church canvas was like a ticket to a summer blockbuster (there were even tickets to see single paintings). No tiny reproduction would do. Similarly, Church spent decades trying to find just the right site and design for his house, which is indeed situated at perhaps the greatest overlook in the Hudson valley, with each window of the house framing a spectacular view that echoed Church’s optimistic, spiritual vision of American nature. (The Persian-by-way-of-Victorian decoration of the house is a little too busy for my tastes, but the views of out of the structure are breathtaking.) 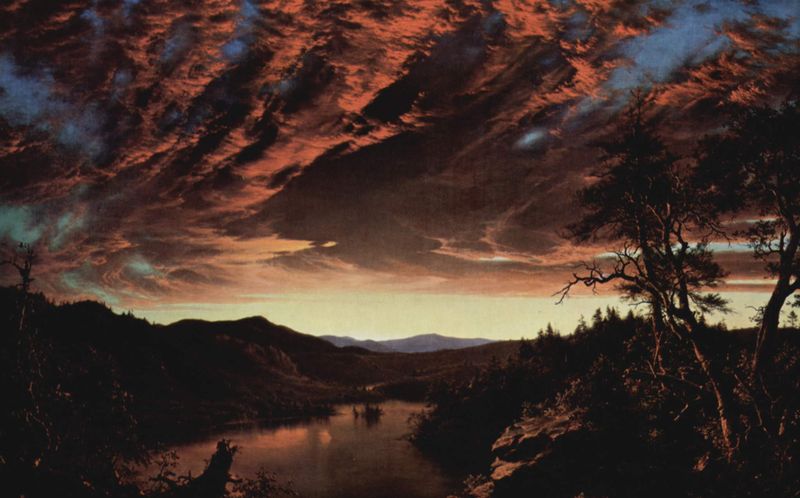 Undoubtedly there are contemporary artists putting their work online, or giving copies away for free in a digital format, but my sense is that these artists are unlikely to show up in the Whitney Biennial, as Finch did in 2004. In the art world, it seems that the physical will for some time trump the digital.

I wonder if it is really the artists that have trouble embracing the digital age- as you say, “Undoubtedly there are contemporary artists putting their work online, or giving copies away for free in a digital format, but my sense is that these artists are unlikely to show up in the Whitney Biennial.”

Curators don’t know what to do with the “remixing/reusing/giving away for free” artists on the web any more than publishers and libraries know what to do with bloggers. Instead, most ignore the crop of artists working wholly online. It doesn’t help that many of the MFA programs actively discourage grads from using digital means for their art. Even if digital projects are encouraged, a physical aspect to the work is also encouraged. The reasoning is pretty simple- imagine an MFA show or gallery that looked like a computer lab.

The new kinds of art and artists that take advantage of the web will show up in museums from time to time, but their domain may stay mostly on the internet- on sites like DeviantArt and Vimeo, where their work can spread to everyone with an internet connection.

Artists I have talked to seem to see themselves as web based or “traditional” – either the web is a big part of what they do and is considered first and foremost (an artwork isn’t done until it’s posted and commented on) or they see the web as only a place to place a small picture of their work to interest galleries and potential dealers (sort of a necessary evil).

Well another interesting piece is that some of the bigger exhibitions this year have emphasized the physicality of art and objects, such as Richard Serra and King Tut.

One other piece is that while museums are using the digital to attract physical visitors, the museums are emphasizing the experience with the physical as different than the experience with a digitized art object. So, while there is some interesting digital artwork being created, it isn’t quite in the mainstream and doesn’t seem to be endorsed by the traditional art world.

1
——
Check the following for some digital artists:

Rhizome.org – their mailing list archives are useful and you can read the artists having this very discussion, should you be so inclined
natalie jeremijenko
christopherbaker.net
http://www.datadreamer.com
gallery9.walkerart.org
the yes men
second life – yes, some artists have created digital paintings that people actually purchase to hang in their homes inside of 2nd life
mark amerika
http://www.isea-web.org
shelley jackson

2
——
There is digital art out there, but some of your points – payment, presentation of work, and strictures of the medium (difficulty with incarnation and especially uniqueness) – are ones that the digital art community is actively and vocally struggling with, in addition to a few you didn’t mention. Take persistence of work – how do you ensure that the work will “stay?” How do you display it in your home or in a gallery? Will it still work in 10 years, or should ephemerality be part of the medium’s appeal?

Ah, now to get to the crux of the matter.

On your very last point you say there may be a few artists willing to give their work away for free…..but why on earth would they do that? Art is not free – everything you see hanging in a museum was purchased at some point in the past and everything you see hanging in a gallery is meant to be purchased in the future. Your book isn’t free. Should it be? After all, you have the luxury of being a prof and are earning money through that, so why wouldn’t you just give all your hard work researching and writing away for nothing…you know, for the public good?

Ultimately, the problems with digital art come from Art’s business model. How do you eat when no one wants to pay for your work? If the traditional model of earning requires a gallery to show and sell your work, and the gallery doesn’t know how to or doesn’t get it, what do you do? If your object blurs the line between art, work, and commerce (as computers are wont to do) – in other words, if your work isn’t obviously “just art” – how can you convince an art collector to buy it? Let’s face it, the types of people who buy art are doing so as much for the credibility that having art imbues as for any actual love of art – and a painting clearly has no other purpose than to be art. But what purpose does a computer have? Is it art? Is it work? These are certainly valid concerns and many of these questions have not been suitably answered.

[…] I won’t get there until the summer, but I’m already looking forward to experiencing the Sol LeWitt retrospective at the always entertaining and often thought-provoking Massachusetts Museum of Contemporary Art, better known as MASS MoCA. (For previous thoughts provoked by MASS MoCA, see my post “The Artistic and the Digital.”) […]

Have you looked at David Hockney’s exhibition, currently on in Paris, of drawings created on the iPhone and iPad?
http://www.fondation-pb-ysl.net/en/Accueil-Fondation-Pierre-Berge-Yves-Saint-Laurent-471.html

These are in the mainstream, have been quite widely reviewed in the UK, and Hockney has been interviewed on the BBC